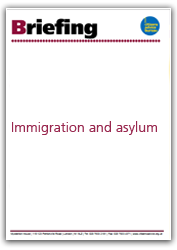 Since 2003 there has been a 15-fold increase in the number of failed asylum seekers in receipt of so-called section 4 support, on the basis that they are temporarily unable to leave the UK for reasons beyond their control.  The Home Office's National Asylum Support Service (NASS) failed to respond adequately to this increase and, during 2005, delay and error in the processing of applications and the delivery of support became commonplace.  This resulted in numerous cases of avoidable and shaming destitution.

NASS has now begun to address this administrative failure.  However, with up to 250,000 failed asylum seekers awaiting removal from the UK - a great many of whom could meet one or more of the section 4 qualifying criteria - the potential for further administrative chaos remains very real.  Furthermore, the section 4 support regime has evolved into one very different to that conceived by Ministers in 2000.  Intended as a short-term and discretionary support system for a very small number of 'hard' cases, it is now a large-scale and largely long-term regime with a statutory basis.

This report sets out evidence of the poor service delivery by NASS in 2005, as well as other problems with the cash-less section 4 regime and the associated negative impact on other public services, including the NHS.  It argues that the evolution of the regime since 2000 now demands appropriate reform of associated policy and practice.  And it recommends how such reform can be incorporated into the Home Office's New Asylum Model - the most radical redesign of its asylum processes in more than two decades.