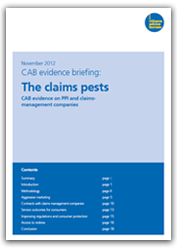 Regulatory action following Citizens Advice’s 2005 super complaint about mis-sold payment protection insurance (PPI) has meant that the banks have had to put aside some £8-£10 billion to compensate affected customers. However, so far only around half of that has been reunited with customers. The scale of this prize has spawned a whole intermediary market of thousands of regulated claims handlers and unknown numbers of unregulated firms who in many cases are looking to top slice this compensation by up to a third, including charging upfront fees. With up to £2 billion of potential earnings on the table, these firms have engaged in a frenzy of marketing activity whereby as many as three quarters of adults in Great Britain receive unsolicited emails, texts or phone calls telling them to claim compensation for mis-sold PPI or an accident.

The evidence suggests that many claims management companies (CMCs) are linked to an unknown number of lead generator operations, often working overseas, feeding them with consumer contact details. We consider that the industry is out of control, and that the sector specific regulator lacks the tools to address the problem. Although 400 claims management firms have been struck off or barred by the claims management regulator, and many hundreds more operate without a licence, the rules governing how CMCs are allowed to operate do not prevent them from cold-calling or “cold-texting” consumers or trading in names. The inadequacies of CMC regulation is impacting on other regulators: complaints about the cold-calling to Ofcom and the ICO are up by 190 per cent and 43 per cent respectively. The key issues which consumers are most concerned about are the constant calling, to such an extent they often believe these things are scams.Consumer protection bodies are warning consumers not to respond to what ought, in theory, to be a legitimate offer of service.

Furthermore, CMCs are charging disproportionate fees – up to third of compensation awards – to help consumers do something which they can easily do for free. Put simply, this is money for old rope. So it is not surprising then that CMC turnover grew by 66 per cent last year, three times the growth in the personal injury claims handling market. 80 per cent of consumers think upfront fees should be banned and the regulator’s rules should align with this. The harm to consumers from all this sharp practice outweighs the benefits of the CMC services introducing them to compensation in the first place.

The report draws on surveys we have undertaken and reports from bureaux setting out how consumers have been treated unfairly by either CMCs or their lead generating partners. It calls for a review and up-scaling of regulation and enforcement, including bans on unsolicited contacts and upfront fees, a crackdown on the lead generator feeds and a strengthening of consumer protection in this market against misuse of data and misleading contracts. Finally it calls for a more proactive approach to PPI redress to bottom out the problem.