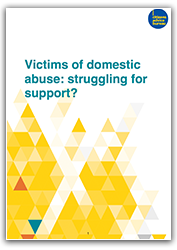 But all victims of domestic abuse ought to be able to access support to manage their relationship, keep themselves safe, exercise their rights to their property, children, access to justice and to rebuild their lives.

Some of this support can be provided by friends and family, but some relies on specialist services and state structures.

Despite welcome government commitments to the Violence Against Women and Girls agenda, increased scrutiny of the treatment of domestic abuse cases by police and the justice system, and a rise in its prominence as an issue, this new report, drawing on evidence from Citizens Advice frontline exposes the reality of many victims of abuse struggling for support.

Read Imogen Parker's blog on Legal aid reforms have harmed justice: it's time for a rethink