Strengthening the incentive to save: a consultation on pensions tax relief 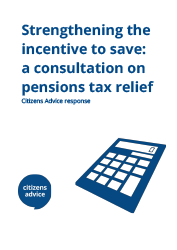 In Strengthening the incentive to save: a consultation on pensions tax relief [ 0.55 mb], we explain our belief that the current system of exempt-exempt-taxed (EET) offers the best long-term results for individuals and the state. During accumulation, it offers a tangible reward for putting money aside and during decumulation it offers a healthy deterrent from withdrawing all savings at once.

The alternative tax-exempt-exempt (TEE) proposal lacks these benefits and would complicate the system for many. It would mean that state and private pensions had different tax treatment and could create intergenerational imbalances if people don’t pay any tax on their income in retirement.

However, we believe that the design of the current TEE system needs reform. Currently it mainly offers incentives for higher rate taxpayers and gives a large public subsidy for a minority of people who make pension savings well beyond a simply ‘adequate’ level.1 The focus of reform should be to encourage more people to save for an adequate income in retirement.

Moving to a flat rate tax relief of, say, 33% would be an improvement on the current system. It would increase rewards for basic rate taxpayers while ensuring that higher rate earners are not taxed more for paying into pensions than taking money up front as income. However, we question how much this reform would in itself drive changes in behaviour to deliver genuinely adequate incomes in retirement.

Hard-working self-employed people, part-time workers and carers all lack access to the new system and are not adequately encouraged to save. We know for example that just 2.2% of tax relief on contributions go to the self-employed, even though they represent 15% of the workforce.2

These questions should be placed at the heart of further analysis and discussion. We recommend that the government considers a more generous incentive to encourage people to move towards minimal ‘adequate’ savings. It could use tax relief to extend the ‘incentive zone’ so people move beyond existing auto-enrolment contributions.

It would also give the self-employed and part-time workers  a ‘kick start’ to a savings habit and reward carers for continuing pension saving when they return to work.

We make the following recommendations:

The government should seek to build consensus on purpose of tax relief and incentives for retirement saving to achieve lasting and sustainable reform. This could be used to set a reasonable level for annual and lifetime allowances to allow people to plan with more confidence.