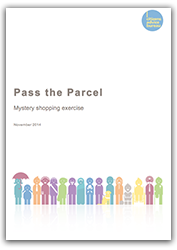 We commissioned GfK Mystery Shopping to conduct an exercise to test consumers’ experiences of competition in the parcels market. This involved mystery shoppers across the UK sending parcels to mystery shoppers in other parts of the UK, using one of a variety of parcel operators. Each assessment consisted of two parts:

The questionnaires completed by the senders and recipients can be found in Annex 1; Annexes 2 and 3 contain the sender and recipient briefings respectively.

A total of 760 parcel despatch assessments were attempted, resulting in 688 successful despatches and 581 successful receipts. Fieldwork took place between 7 May and 8 June 2013.

No shopper taking part in the exercise worked for any of the organisations being evaluated.

Throughout the report, base sizes of less than 30 are indicated as ‘low base’. These results can only provide indicative findings.