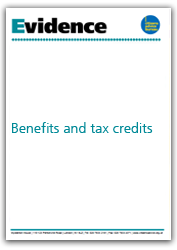 The changes in delivery of welfare benefits by Jobcentre Plus in the past three years have caused significant disruption and hardship for thousands of benefit claimants. Families have been left waiting weeks for their benefits to be processed and telephone systems have been unable to deal with the large call volumes. The most vulnerable claimants, homeless people and those with mental health, learning or other disabilities have suffered the worst as local office support has decreased and alternatives to phone contact have been refused.

Jobcentre Plus are responsible both for delivering key out of work benefits and providing support and help for people to move into work. Jobcentre Plus has around five million working age benefit customers at any one time. The 2004 Government Spending Review announced an efficiency savings programme which would reduce the numbers of Jobcentre Plus staff by around 14 per cent and lead to dramatic changes in the way Jobcentre Plus delivers it services.

The new standard operating model for claiming benefits has introduced the telephone as the main route for applying for and contacting Jobcentre Plus about benefit claims. There is a reduced face to face service for claimants in local offices. Benefit processing is being centralised into a smaller number of large processing centres.

The Department for Work and Pensions has judged the rollout of the new Jobcentre Plus model to have been successful, having largely kept to their timetable and met their national customer service targets. This is despite the fact that Jobcentre Plus' own figures show that it failed to process income support or jobseekers allowance within their own target times during most of 2006. In some areas even average processing times hit five weeks – almost double target times.

Citizens Advice does not believe the rollout can be deemed successful until Jobcentre Plus can demonstrate that the quality of, and access to, their services has improved for all customers, particularly vulnerable groups.

CAB clients are most likely to be within the C2DE social economic classes and have a long term health illness or disability. We help with three and a half times more income support and incapacity benefit enquiries as jobseeker’s allowance enquiries. Bureaux experience of the new model has involved seeing thousands of families having to face weeks without any money. People have been unable to contact benefit processing departments to find out when payments will arrive; sent away from Jobcentre Plus offices without help; made to wait in call boxes for hours trying to claim a crisis loan on a line unable to meet demand; and deaf people have been directed to use a telephone. Last year CAB enquiries about Jobcentre Plus benefits went up by 10 per cent. Claimants seeking help with claiming crisis loans doubled.

In two bureau surveys in autumn 2006 and spring 2007 Citizens Advice found that the majority of bureaux believed Jobcentre Plus services were significantly worse than before reorganisation. The months between the surveys saw only marginal improvements in benefit processing times and a reduced likelihood of claimants being refused the option to make a benefit claim without having to personally use the phone. Access to crisis loans got worse.

Although there are clearly still serious problems, it is important to acknowledge that Jobcentre Plus are already taking measures to address the issues, and we understand that they are finalising a further action plan that reflects the evidence in this report. They have also indicated that they will be happy to work with the Citizens Advice service to monitor progress.