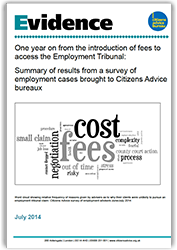 In June and July this year, Citizens Advice undertook a six week survey to enable Citizens Advice Bureaux employment advisers to provide information on the clients they were seeing with a potential cause of action to the Employment Tribunal. As well as providing details of the case, advisers were asked to assess, where possible, the strength of the claim; the likelihood of the client pursuing the claim, and the reasons for their assessment. This briefing summarises the main findings of the survey.

•80 per cent of cases were assessed by an adviser as having a Very good, Good or 50/50 chance of success if they were pursued to employment tribunal.

•Less than a third of claims assessed as having a Very good, Good or 50/50 chance of success were considered likely to be, or were definitely being, taken forward.

•For claims less than £1,000 in value, less than a quarter were assessed as likely to be, or were definitely being, taken forward.

•Where cases were assessed as unlikely to be taken forward, fees or cost were the most common reasons given by the adviser, in over half of cases.

•One fifth of cases contained discrimination as a basis for the claim.

•40 per cent of clients were potentially eligible for fee remission.

•43 per cent were not in employment at the time of their contact with the bureau adviser. 25 per cent were claiming a social security benefit as a direct result of the alleged complaint against the employer.