Falling behind: an assessment of debt collection practices in the mobile phone market 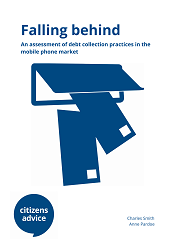 When it comes to collecting debts from their customers, many industries have adopted fairer practices in recent years, and Citizens Advice has worked closely with regulators and firms to make debt collection fairer, particularly in energy, water and financial services. However, when it comes to mobile phones, the sector has lagged behind.

This is not surprising when we think that mobile phone costs have been falling, bills are smaller than for other utilities in any case, and mobiles were a luxury until barely 20 years ago; there simply hasn’t been the same pressure to act. But now, as mobiles become more essential, and debt problems rise amongst young people, we believe the time has come for the mobile industry to clean up its act.

Concerns over this issue prompted Citizens Advice to carry out a review of debt collection practices in the mobile phone market, drawing on unique data gathered from across the Citizens Advice service, which included:

In Falling behind: an assessment of debt collection practices in the mobile phone market [ 0.77 mb], we set out the findings of this review.

In section one we highlight the systemic issues encountered time and again by our advisers when helping clients to resolve their mobile phone debts. In a number of cases the policies and practices of the mobile phone network had actually played a significant role in the consumer falling into debt in the first place.  These cases largely fall into three categories: inappropriately extended credit, unclear contract exit procedures, and the unfair treatment of victims of crime.

However, the majority of the cases we examined point to cumbersome, inadequate debt collection processes which act as a barrier to attempts by customers and their advisers to resolve debt problems. Three themes emerged from our analysis of these cases: disproportionate and inflexible debt collection processes, poor dispute handling, and inadequate communication systems.

These systemic issues are not unique to the mobile phone sector - successful action has been taken to tackle similar problems in the water, energy and financial services markets.

In the second and final section we therefore consider whether similar steps could be taken to address these problems in the mobile phone market.