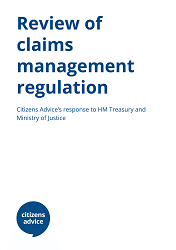 As it has developed its rules and gained new powers, we feel that the Ministry of Justice Claims Management Regulator has become more effective at tackling poor and unacceptable conduct by claims management companies.  Nevertheless, we feel that it could become a more effective regulator in policing the market.  In particular we are disappointed that Government has yet to ban the use of unsolicited telephone calls and texts by claims management companies and lead generators.

Evidence from our services and sources such as ICO complaints data show that CMCs continue to bombard consumers with unwanted calls and texts, do not provide clear upfront information on their charges (which are frequently disproportionate to the amount of work undertaken), and often provide poor customer service which is unresponsive to enquiries and complaints. We would welcome reformed regulation of these companies which results in more robust action being undertaken to tackle these problems, which are well-documented in our reports The Cost of Redress [ 460 kb] and The Claims Pests [ 500 kb].