Learning from mistakes - how complaints can drive improvements to public services 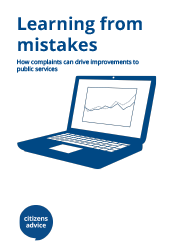 In Learning from mistakes [ 1.5 mb] we explore what happens when people experience poor service from public service providers in areas ranging from health and education to taxation and social care. Citizens Advice has seen a 63 per cent increase in requests for help to complain about public services over the last four years.

We decided to explore why people are struggling to complain, or deterred from complaining, and how reversing these trends and making better use of complaints data could drive service improvements and help identify early signs of service failure.

We commissioned a nationally representative survey, asking people about their recent experiences with public service providers, and interviewed Citizens Advice clients who have gone through formal public service complaints processes.

We also looked at less formal complaints channels, using natural language processing (NLP) and machine learning techniques to analyse how people use social media to express their frustration after poor service, and what insights this new complaints channel might offer for service improvements. We found that: