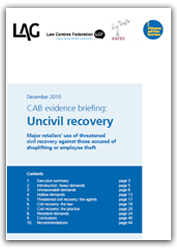 Since the publication of Unreasonable demands in December 2009, Citizens Advice has obtained both a considerable amount of new information on the practice of the civil recovery agents, and a formal Counsel’s opinion on the relevant case law.  And Citizens Advice Bureaux have reported dealing with demands issued by two new civil recovery agents, including a US-based law firm.  It would appear that threatening civil recovery in cases of low-value alleged theft is a lucrative and growing business.

This report – Uncivil recovery – therefore sets out 30 detailed, longitudinal case studies drawn from more than 300 CAB-reported cases examined in detail by Citizens Advice to date, together with the key findings of a quantitative analysis of these cases.  And it draws on the key elements of the above-mentioned Counsel’s opinion on the relevant case law.  In doing so, Uncivil recovery aims to assist those who have received such a civil recovery demand to come to their own decision on how – if at all – to respond.

In short, the practice of threatened civil recovery, as described in this report, is not only unfair (and arguably illegitimate), but provides no panacea for the (undoubtedly substantial) cost of retail crime.  It does not target those responsible for most retail crime – criminal gangs and other persistent offenders – and it ‘recovers’ less than two per cent of the £977 million annual cost of the “security and loss prevention” measures reportedly taken by retailers. Indeed, the principal beneficiaries of the practice would appear to be the civil recovery agents, who collectively profit by millions of pounds and have no obvious interest in seeing the reduction in retail crime sought by public policy.