The cost of redress 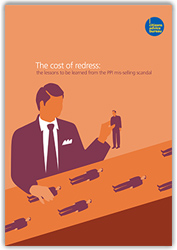 The lessons to be learned from the PPI mis-selling scandal

Payment Protection Insurance (PPI) was an unprecedented mis-selling scandal. Huge numbers of consumers have sought redress and financial service firms have collectively put aside around £22 billion to cover their compensation bill and associated costs. The Financial Ombudsman Service has received more complaints about PPI than any other financial product.

While claiming compensation for a mis-sold financial product is a welcome demonstration of consumer empowerment, redress for mis-sold PPI products quickly became characterised by a proliferation of claims management companies (CMCs). We estimate that collectively, consumers could have paid CMCs up to £5 billion out of the £22 billion set aside by the banks for compensation.

While CMCs offer a legitimate service for consumers in some circumstances, too many people are paying for a CMC to make a claim on their behalf, even though they could make the claim directly for free. Our research shows that 39 per cent of people who had used a CMC to make a claim didn’t know that they could have made the claim themselves, and that 51 per cent weren’t aware of the free supportive materials, and almost half  said that they if they had been aware of the free materials, then they would not have used a CMC. The proliferation of CMCs has also allowed a number of CMCs to cause consumers further detriment by the widespread use of cold calling as a marketing tool and the poor treatment of their customers.

The report highlights that the banks’ initially slow, reluctant approach to taking responsibility for PPI created a redress vaccuum in which CMCs were able to proliferate. It seems clear that the issues in the CMC market, from nuisance calls to the value of compensation for consumers extracted through commission, would be significantly less widespread if the banks had acted quickly and decisively.

The report recommends that the financial services sector learn the lessons from PPI and start to re-establish trust in their services by developing proactive redress strategies to ensure that claiming directly is the instinctive approach of the majority of claimants.  It also recommends regulatory action to improve the conduct of the remaining scrupulous CMCs and a ban on cold calling by CMCs.