A life in debt 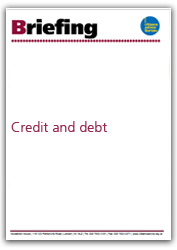 The profile of CAB debt clients in 2008

In July 2008, 52 Citizens Advice Bureaux in England and Wales surveyed 1,407 new debt clients. We found that:

Citizens Advice have seen a dramatic 100 per cent increase in the number of debt enquiries they have dealt with over the last 10 years.  Debt is now the number one advice issue in bureaux, accounting for one in three of all enquiries.  CAB advisers around the country are dealing with over 6,923 new debt problems every working day.  Here are a few examples:

A lone parent with three children sought advice from a CAB in West Yorkshire.  She was suffering from serious depression and had attempted suicide several times following domestic violence and a relationship breakdown.  She had a number of debts, including a £706 fuel bill which was being collected at £10 per week via her pre-payment meter.  The client could not afford her basic living expenses and was falling into debt with other priority bills.  At the time of seeking advice, she relied on her local church delivering food parcels and could not afford to meet her health costs.

A Greater Manchester CAB helped a woman who was unable to work following an accident and was now living on benefits.  She needed advice about her debts.  The client told the CAB that she could not afford to put the heating on this winter and was terrified of getting further into debt.  She had borrowed a ski suit from a friend to wear to keep her warm in her house.

A man sought advice from a CAB in North East Wales about £60,000 of credit debts and mortgage arrears.  His home was being repossessed.  He had decided that the best way forward to clear his debts was to go bankrupt but could not afford the court fees to petition for bankruptcy (£495).