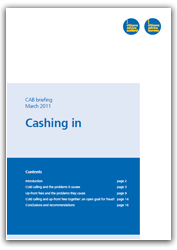 Current economic conditions provide fertile ground for unscrupulous credit businesses and fraudsters. Rising unemployment and falling incomes make households more vulnerable to financial difficulties. Recent research estimates that between 5.5 and 6 million households are either in arrears with bills or credit commitments or are finding it a constant struggle to keep up.

For many of these consumers mainstream credit will be out of reach and alternative higher cost credit is becoming increasingly available through a proliferation of online lenders, credit brokers and the practice of unsolicited phone and text marketing.

This briefing highlights the experience of CAB clients in England, Wales and Scotland who have been ripped off by firms that offered to help them get an unsecured loan. The rip-off is based on two related business practices that are exposing consumers to serious bad practice and fraud:

Many of the problems seen by the CAB service involved seemingly legitimate licensed credit businesses breaching current consumer protection rules. Our evidence shows that firms are:

We have also seen people who have been the victims of advanced fee fraud, where criminals posing as credit brokers are using these same tactics of cold calling and asking for up-front fees to steal considerable sums from consumers who are often the least able to afford it. Crucially, we believe that this fraud only operates effectively because current consumer credit legislation gives consumers reason to believe that cold calling and charging up-front fees are acceptable and normal business practices.

Research indicates that both types of consumer detriment are widespread. The OFT in 2006 estimated that loan fee scams cost the UK public £190 million a year and affected 110,000 adults. More recently the OFT announced that advance fee credit was one of the top scams reported to Consumer Direct. Press releases for Call Prevention Registry, an organisation that provides a telephone preference service, suggests that the recession has led to a growth in the proportion of unsolicited sales calls from loan and debt management companies – from five per cent of all three billion unwanted sales and nuisance calls before the recession to over 28 per cent of calls (840 million) in 2009.

CAB evidence suggests that cold calling is concentrated among credit brokerage firms that appear to target people unable to get mainstream credit, perhaps because of a poor credit history, low income or current financial difficulties. Indeed in some cases the targeting has a predatory character with people being cold called by other brokers, lenders, debt management and claims management firms following a contact with one of these broker firms.

The OFT has recently taken enforcement action against a number of lead generation and credit broker firms for the practices described in this report. This is welcome, but CAB evidence set out in this briefing suggests that a wider policy response is needed to prevent growing consumer detriment. Therefore Citizens Advice and Citizens Advice Scotland believe that the Government should urgently amend consumer credit legislation to address problems with cold calling and up-front fees directly.

We will start by looking at the problems and consequences arising from unsolicited phone marketing and then we will look at evidence of problems with up-front fees.