A very general practice: How much time do GPs spend on issues other than health? 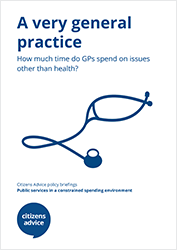 A very general practice: How much time do GPs spend on issues other than health? [ 0.75 mb] presents recent Citizens Advice research on the level and impact of ‘non health’ demand faced by doctors in general practice (GPs).

Our central finding is that GPs in England spend almost one fifth (19 per cent) of their consultation time on patients’ non-health issues. This translates to an implied cost of nearly £400 million to the health service.

The results of our polling of GPs carry five key insights:

What will new ways of working in the NHS look like in practice?

Could a better understanding of non-health demand patients bring to GPs, and new ways of meeting this demand contribute to the £22 billion in efficiency savings the NHS needs to achieve in this Parliament?

We believe this is an important area to explore, and presents opportunities for new ways of working across the front line of the health service.

The report is based on polling commissioned by Citizens Advice and conducted by ComRes. ComRes to conducted a quantitative survey of GPs in February 2015 through an online omnibus survey of GPs in the UK, which is carried out on a monthly basis. We asked GPs to estimate the amount of time they spend in consultations with patients discussing non-health matters, what these issues are, what change in demand levels the last year, and how this impacts on their work. ComRes interviewed 1,002 GPs in the UK, including 824 in England, online between the 18and 25 February 2015. Data were weighted to be representative of all GPs in the UK by former SHA region.

Definition ‘non-health’: The report uses the term 'non-health’ to describe queries which are not principally or specifically about a health problem.
Cau