The pain of complaining 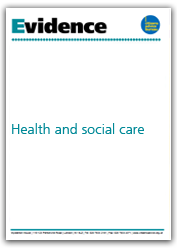 1.1  Central to the Government’s NHS reforms is a radical vision of a patient-focussed health service, designed around the needs of the patients rather than the service providers.  Reform of the NHS complaints procedure has been a key part of this process.

1.2  The Department of Health has described its vision for the NHS complaints procedure in terms of four principles:

1.3  In order to deliver this vision, changes have been made to the complaints procedure and new structures put in place, which are intended to make the system more independent, more responsive and easier to access.  These have included:

1.4  In addition a Patients Advice and Liaison Service (PALS) has been put in place in every Trust, to provide information and on the spot help where patients want to resolve a problem without making a formal complaint.

1.5  Citizens Advice is contracted to deliver ICAS in six of the nine Regional Government areas in England, building on its existing network of CAB outlets in local communities. People are able to access specialist ICAS support either via a referral from a CAB or by dialling an 0845 telephone number.

1.6  Further changes to the complaints procedure are anticipated, in order to respond to the outcomes of the Shipman Inquiry.  In addition, in March 2005, the Health Service Ombudsman published a report highlighting continued weaknesses in the complaints system and making a number of recommendations for change.

1.7  The CAB service, with its active involvement in delivering ICAS as well as its wider advice role in health settings, is well placed to contribute to this area of policy development.  The evidence from ICAS bureaux provides insight into how the complaints procedure is working for patients.  In the course of their work advisers see examples of both good and bad complaints practice, and patients who are both satisfied and dissatisfied with their experience of using the process.

1.8  The vast majority of people who use the health service do not expect or need to complain about the treatment they receive.  However, when they do, it is often in the context of highly distressing circumstances which may have long term consequences for their health and well being, or resulted in the death of a loved one.  In such circumstances it is crucial that people’s experience of using the complaints system is positive rather than painful.

1.9  This report uses evidence from CAB ICAS work to examine the extent to which the four principles outlined above are being delivered in practice.

1.10 The overall picture is of significant variation in the extent to which Trusts have embraced these principles.  A key finding which runs throughout the CAB ICAS evidence is that where the complaints procedure works well, it can be a powerful force for making things better, both at the level of the individual complainant and also for the wider NHS.  Patients are satisfied, complaints are settled at an early stage, litigation becomes less likely, and changes are put in place which benefit the service as a whole and make a similar complaint less likely.

1.11 On the other hand, where the complainant faces barriers in terms of access, delays, a lack of transparency or defensive attitudes, then this experience simply makes matters worse.  It increases the person’s frustration and distress, and the likelihood that s/he will decide to pursue the claim through the legal system, at significantly greater cost to the public purse.

1.12 This report has detailed how patients can face:

1.13 The result is that lessons are not learned, much needed changes are not put in place and many people are far from experiencing a patient-centred complaints system.

1.14 The report makes a number of recommendations aimed at addressing the problems it has identified.

1.15 We recommend that the Department of Health should set a national framework for complaints handling in order to reduce the current wide variation in practice.  The framework should include core standards to ensure that complainants experience a similar service regardless of where they live, or what organisation they are complaining about.  The core standards must ensure that there is clarity of expectation on both sides regarding the content of the process, timescales for the various stages, and the nature of the outcome.

1.16 We recommend that ensuring compliance with these standards is a priority for the Healthcare Commission through its regulatory functions.

1.17 We recommendthat the Healthcare Commission should develop best practice guidance in complaint handling.  Patients and their representatives, including ICAS providers, must be actively involved in this process to ensure that it delivers a genuinely patient-focused service.  In addition the engagement of professional bodies will be crucial if the existing culture of avoidance and defensiveness is to be overcome.

1.18 We recommend that in relation to primary care, patients should be able to make their complaints direct to the Primary Care Trust (PCT), which should also play a central role in managing and monitoring the local resolution stage of the complaints process.  Such a reform would help overcome patients’ reluctance to make a complaint against their local health practitioner, for fear that this will have an impact on their ongoing care.  It should also mean that resources and expertise in complaints handling can be pooled, thus raising standards of local resolution.

1.19 We recommend that there should be a single portal by which complaints or concerns can be directed to the appropriate quarter.  We consider this should be a national service, delivered by a body which is transparently independent of all health service providers who may be the subject of a complaint.  The portal should also provide information about the advice services available, including PALS and ICAS, and should help to ensure patients are clear about the respective roles of these services and the referral protocol.

1.20 We recommendthat the current 20 day target for completing the local resolution stage should be reviewed to ensure that it encourages both a quality and a timely response by the Trust.  We propose that, in order to ensure Trusts face no disincentive to arranging meetings where appropriate within the period, the target should be extended to 30 days.  At the end of the period, patients should be sent a full ‘signing off’ letter, which clearly signals to the complainant that the local resolution process has reached its conclusion.  To provide for exceptional cases where the 30 day timescale is insufficient, there should be a specific rider enabling Trusts to exceed the time limit, in which case they must write to the complainant giving reasons and a clear deadline by which a full response will be given.

1.21 We recommendthat consideration should be given to creating incentives for Trusts not to delay responding to requests from the Healthcare Commission for additional information and documents in order to pursue their investigation.  Options could include the Healthcare Commission taking the delay into account in its considerations, compensation for complainants, or requirements to take remedial action.

1.24 We recommend that a protocol should be set up so that all NHS Trusts and PCTs send copies of their complaints and PALS reports to the PPI Forums and to the local authority OSCs which are responsible for scrutinising their work.

1.26 We recommend that guidance and protocols are developed as a matter of urgency regarding reporting arrangements about trends in adverse incidents between ICAS, PPI Forums and OSCSs.  This must be done in a way that does not compromise patient confidentiality.  It is crucial that such developments are not delayed as a result of the reorganisation of functions from the proposed abolition of the Commission for Patient and Public Involvement in Health (CPPIH).