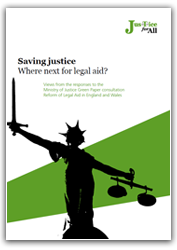 Justice for All is the simple notion that everyone should be treated fairly under the law, no matter who you are, how much money you have or where you live. Our coalition of organisations and individuals have come together because we value free legal advice – we believe free, independent advice and representation on legal matters is essential to achieve justice for all. But access to free legal advice and help – including representation – is becoming increasingly restricted, and the funding for free advice and legal services to those who cannot afford it is increasingly under threat from several directions, especially from the Ministry of Justice’s proposals for legal aid. The Ministry of Justice received over 5,000 responses to their consultation on legal aid reform. What follows is an analysis of some of those stakeholders’ responses.

A common worry from respondents was that the proposals were lacking in evidence, misunderstood the extent and range of legal advice needs, underestimated the potential impact on the poorest and most vulnerable, and risked inflicting collateral damage on the legal advice sector (especially voluntary sector agencies) and the justice system. Respondents were extremely concerned that well over half a million clients would miss out on free advice under the proposals.3

The principal flaw is the reliance on thematic categories of law as proxies for determining who is in need. These categories only have a loose association with real lives and real problems. Judge Robert Martin, President of the Social Entitlement Chamber

The legal aid scheme has expanded according to need. This need has been driven by increasing complexity of law, welfare, education, employment and immigration administration over the years, coupled with easier credit access and consequent growth of indebtedness. AdviceUK

If implemented, the proposals will lead to considerable hardship and stress for people who face legal problems. The proposals will also significantly reduce people’s faith in the fairness of the law and public administration. Advice Services Alliance

In excluding large areas of the law from the scope of legal aid, Liberty believes that the proposed reforms will create alarming gaps in protection, denying justice to many but hitting the most vulnerable the hardest. Liberty