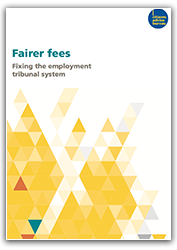 People are being put off holding unfair employers to account by too-high fees and a lack of awareness about support, finds Citizens Advice.

In July 2013 the Government introduced fees to access the employment tribunal. The latest official figures released last week show a 66% reduction in applications.

The Government introduced fees in order to incentivise earlier settlements, ease the cost to taxpayers and bring the employment tribunal in line with other justice systems.

The new findings out today are based on a survey of 361 people who have been having problems at work. The Citizens Advice report, Fairer fees: Fixing the employment tribunal system, finds:

The research also showed that whilst people were put off by too-high fees, a clear majority would be willing to pay a fee. Nine in ten (90%) said they would not be put off by a £50 fee.