Who are the self employed? 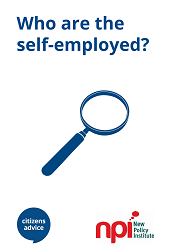 Existing research on this type of employment shows a mixed picture. Citizens Advice has shown that so-called bogus self-employment could affect almost half a million workers, and research from the ONS suggests that for those who do become self-employed, it offers positive choice, independence and flexibility.

So Who are the self-employed?  [ 1.6 mb]And how different is the picture to a decade ago? Citizens Advice has worked with the New Policy Institute to find out more about the growth in this diverse population.

Broadly, our findings can be categorised into three themes:

Our research shows that the self-employed are not an homogenous group, and as this population has grown there is now even greater diversity in terms of age, gender, type of industry and financial well-being than a decade ago. And pertinently for policy-makers, being self-employed today means that you are more likely to have a low income, to be a lone parent, to be a private renter and to have part-time hours of work. In short, self-employment is more likely than a decade ago to come with insecurity.

Most significantly we found that a very small proportion of self-employed people are paying into a pension scheme, despite the fact that people are remaining self-employed for longer, and more older people are now working for themselves. This can put those at the lower end of the labour market at a disadvantage.

Lower pension savings and a considerably lower average income for those who are self-employed mean that financial security and well-being can be at risk. Policy makers should carefully consider the implications of growing self-employment in this context.

The introduction of auto-enrolment for workplace pensions has improved levels of saving among employees, and an equivalent offer to support saving among the self-employed is one option to address this which deserves consideration.

The extent to which self-employment has grown and changed in the last decade gives us confidence in saying that it will remain permanent fixture of the UK labour market.

The UK’s major political parties have recognised the need to support this group. The Government's review into the support for self-employed people is timely, and policy makers should continue to carefully consider the implications of the growth and variance of self-employment and the continuing impact that this will have, especially on financial security and pensions.