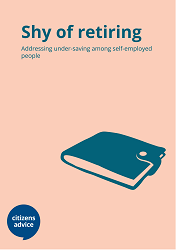 While many self-employed people are happy in their work, we found that most hadn’t given a great deal of thought to when, if and how they might retire. We found that many assume they will continue to work (either full, or part-time) long past retirement age. While for some this is due to having a strong sense of ownership of their work, others, less positively,  have little provision for retirement and so feel they have no choice but to continue working.

Pensions are not perceived to offer good value for money.  Shy of retiring - addressing under-saving among self-employed people [ 1.4 mb] reveals widespread misunderstanding of the tax breaks associated with pensions among self-employed people and employees alike - seven in ten (69%) do not understand the tax breaks provided by a pension. This, coupled with the lack of an employer contribution leaves many feeling that pensions are not a worthwhile investment.

This is compounded by both a lack of trust and lack of information. For instance, many are unaware of the flexibility offered by most pension providers - they believe that they would need to continue to pay into their pension, even if their income dropped or if they stopped working. Furthermore, while employees tend to get information about pensions from their employer, self-employed people have to  be pro-active and seek this out from other sources.

As such, self-employed people can feel isolated in terms of not receiving information and advice about their options, resulting in bewilderment and inertia. A self-employed person will not make the pro-active decision to contribute unless they both understand and trust pension products: a double barrier.