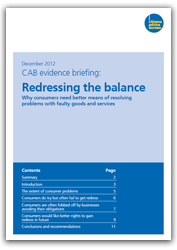 The Citizens Advice service is dealing with high demand for advice on consumer problems. From April to September 2012, half a million people sought advice about a consumer problem from a bureau or our consumer helpline and there were 1.8 million views of the consumer rights information on our website.

Our own research of the general public and clients of the Citizens Advice service has shown that consumer problems with goods and services are widespread. Nearly three quarters of the clients that we surveyed had experienced a problem which is covered by current consumer law. Ninety four per cent of these people had complained, but only 10 per cent of these were completely successful.

Most people wanted more ways to obtain redress than their current right to take a business to court. Only nine per cent of the general public felt that court action was enough.

The Government intends to bring forward legislation to improve consumers’ rights in the 2013 Queen’s Speech. We believe that any new consumer legislation must include measures to improve access to redress which are supported by consumers themselves.

Our research shows that there is strong support for the following:

The Consumer Rights Bill, which will be in the 2013 Queen’s Speech, needs to include options to improve consumers’ access to redress for faulty good and substandard service.