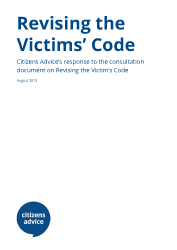 The revised Code aims to improve victims’ rights and ensure compliance with the EU Victims’ Directive.

In April 2015, Citizens Advice began delivery of the Witness Service in criminal courts across England and Wales.

Citizens Advice understands the issues faced when people become involved in complex legal issues. In 2013/4, bureau staff and volunteers helped over 140,000 people with legal issues. Of these, over 40,000 clients needed advice about court proceedings.