Still wish you were here 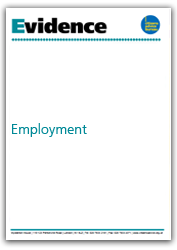 In September 2004, the Prime Minister, Tony Blair, pledged that a third term Labour government would increase the statutory minimum paid holiday entitlement, from the current four weeks per year (which can include the Bank Holidays) to “four weeks plus Bank Holidays”.

Citizens Advice warmly welcomes this pledge, which if implemented will give some two million workers more time for themselves and their families.  However, it seems unlikely that this benefit would be felt by many of the tens of thousands of workers who are not receiving their current statutory minimum paid holiday entitlement.  As a result, the existing inequality between those workers who receive their legal rights (the ‘haves’), and those who do not (the ‘have-nots’) will increase.

Low-paid and non-unionised, these ‘have-nots’ perform unglamorous but essential work from home, or in small workplaces such as: care homes; bars, restaurants and hotels; shops; and contract cleaning companies.  And, for many, the legal protection supposedly offered by the Employment Tribunal system is rendered meaningless by a number of factors, not least their fear of being victimised or dismissed simply for making a Tribunal claim (or even just for initiating statutory grievance procedures).

This report argues that, in order to ensure that such workers benefit from the Government’s enhancement of statutory workplace rights, the more accessible and pro-active compliance regime associated with the National Minimum Wage – commonly regarded as “a huge success” – should now be extended to some of these rights, through the establishment of a Fair Employment Commission.  Working closely with other agencies, the Commission could ensure a more joined-up system of advice and business support for small employers, as well as a more pro-active (but educational rather than punitive) approach to compliance.