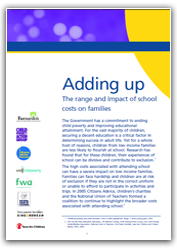 The range and impact of school costs on families

The Government has a commitment to ending child poverty and improving educational attainment.  For the vast majority of children, securing a decent education is a critical factor in determining success in adult life.  Yet for a whole host of reasons, children from low income families are less likely to flourish at school.  Research has found that for these children, their experience of school can be divisive and contribute to exclusion.

The high costs associated with attending school can have a severe impact on low income families.  Families can face hardship and children are at risk of exclusion if they are not in the correct uniform or unable to afford to participate in activities and trips.  In 2005 Citizens Advice, children's charities and the National Union of Teachers formed a coalition to continue to highlight the broader costs associated with attending school.

In February 2007 a new Department for Education and Skills (DfES), now Department for Children, Schools and Families (DCSF), School Admissions Code came into force in England.  For the first time the Code makes clear reference to the importance of limiting the costs of school uniform and trips.  In Wales the Assembly Government consulted on new guidance on uniform policies in 2004, and will be issuing guidance to school governing bodies in late September 2007.  this will provide advice on ways to reduce the cost of school uniform.

In June and July Citizens Advice undertook a survey of parents to find out whether schools' practices comply with the guidance as set out in the Code, and what further changes schools will need to make in order to comply.  Overall, the findings suggest little compliance with the principles of the Code by the schools represented in the survey.  The wide range of comments include both good practice as well as poor practice, highlighting a lack of consistency between schools.

This briefing argues that stronger enforcement responsibilities need to be placed on statutory bodies to ensure that children from low income families are not disadvantaged in school.

Other costs associated with schooling

The impact of cost