Cancer can often radically alter the financial circumstances of those affected by it. People may become unable to work and suffer a loss of income, while at the same time being faced with many extra expenses: travel to and from treatment; expensive special dietary requirements, even increased heating bills from a reduced ability to tolerate the cold. Relatives may also need to give up work in order to care for someone with cancer. Together these can put an enormous financial strain on people affected by cancer, who may find themselves struggling to negotiate the benefits system when at their most vulnerable. 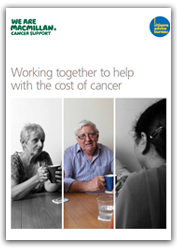 This is why Macmillan Cancer Support and Citizens Advice have formed a partnership in which local Citizens Advice are funded by Macmillan to provide advice on welfare benefits to people affected by cancer. There are 78 Citizens Advice local offices across England that have a welfare benefits advice project funded by Macmillan Cancer Support. Caseworkers advise clients about all benefits they are entitled to and provide help claiming them. They also ensure that they are aware of any available grants which could assist them, and can provide advice on other issues, for example debt, if necessary. Between January 2007 and April 2011 statistics have shown that over 38,000 clients had been assisted and had received income gain of over £77 million, with £1.1m of debt written off.

How a Macmillan caseworker supported Toby

After Toby’s diagnosis of throat cancer he needed an operation to have his teeth removed and was being fed via a tube to his stomach while waiting to begin chemotherapy and radiotherapy. This meant that he began to struggle with money, living only off his pension and pension credit, and his rent soon became unmanageable. Toby was at risk of losing his home.

Toby put in a claim for housing benefit but unfortunately there was a delay in processing this. He was forced to use his pension to pay all of his bills. This left him unable to afford an adequate diet and other household costs such as heating.

The Macmillan caseworker was able to give Toby the extra help he needed to get his finances back on track. She contacted the housing benefit office and local council, and after a day of phone calls back and forth the claim was paid straight away. Toby was awarded full housing benefit, which was back dated for 14 months, meaning he got a cheque for £6,397.02.

As a result of the advice he received Toby’s home is no longer at risk and he is able to afford his household costs.