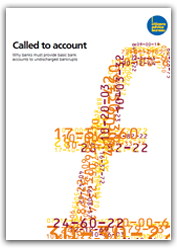 Great progress has been made in recent years in improving access to bank accounts. Banks and the government should be applauded for meeting their target of halving the number of unbanked, and enabling an extra 1.82 million people to open a bank account for the first time1.

However, while significant advances have been made in encouraging financial engagement amongst people who have never had a bank account, new pockets of financial exclusion have emerged. Citizens Advice Bureaux have long been active campaigners and supporters of efforts to tackle the problems faced by people who are excluded from the financial mainstream and our advisers report that people with debt problems can find themselves facing particular difficulties.

For people whose debt problems are impossible to manage there may be no option other than to resort to personal insolvency, such as bankruptcy or a debt relief order (DRO). People in this situation can struggle to obtain what most of us take for granted and without which we would struggle to manage – a bank account.

When someone is made bankrupt their life does not stop. Wages still need to be earned or benefit income received. Bills still need to be paid. Without access to a bank account these basic tasks can become huge and costly obstacles to overcome, particularly for people who are often at a vulnerable point in their lives. These difficulties impact not only on the individual concerned, but also upon their families and wider society, for example by preventing households from obtaining the best deals for basic services and by creating barriers to employment.

Listen to this month's Advicepod from Citizens Advice about how difficult it is for people who have gone bankrupt to open a bank account. Podcast lasts approximately 3 minutes.