A problem shared? Exploring the market for guarantor loans 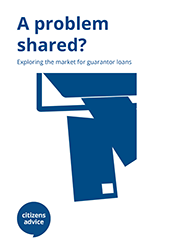 On 2 January 2015 the Financial Conduct Authority introduced tough new controls on payday lending. We worked closely with the FCA on these changes and welcome the protection they offer to vulnerable borrowers.

Since the regulator toughened its stance, we have seen problems with payday loans fall 45 per cent. As these changes are implemented, however, it is important that regulators are vigilant to the risk that the problems linked with payday loans simply move elsewhere.

A problem shared? [ 0.65 mb] is the first in a series of briefings on the credit products that surround payday loans, exploring the case for further improvements to consumer protection.

In this note we focus on guarantor loans, a credit product in which a borrower gives the name of a guarantor, normally a friend or family member, as security for a loan. The guarantor is then pursued by the lender in the case of default or arrears.

Guarantor loans – the next payday lending?

In 2013, the latest year for which good data is available, 53,000 people took out a guarantor loan and the market was worth £154 million. This is a far smaller market than that for payday loans but we know that the market is growing.

Companies House data shows the market’s largest lenders have grown since 2012 while the largest guarantor lender saw its turnover grow 30 per cent and its profits 40 per cent from 2013 to 2014.

Our market analysis suggests that guarantor loans are similar to payday loans in that they are delivered quickly, typically within 24 hours, and are marketed to borrowers with poor credit histories.

However, they differ in three respects. First, they are larger, typically ranging from £1,000 to £7,500 (while the average payday loan is £260). Second, they attract lower interest rates, although still high by wider industry standards, ranging from 39.9 to 49.9 per cent and averaging 46.3 per cent. Third, they last longer, with the loan contract typically lasting from 12 to 60 months.

Importantly, the interest rate and duration of guarantor loans puts them outside of the standard definition of high cost credit, even though large amounts of interestc an accumulate over the life of the loan.

So what harm is caused by guarantor loans? Historically our own data has shown small numbers of issues with guarantor loans; only 530 people came to us with an issue with a guarantor loan in the three years from April 2012 to April 2015.

As the market has grown, however, we became concerned that this might represent under-reporting, so in April 2015 we reviewed the measurement of guarantor loans. This year alone we now project 850 cases.

This remains significantly fewer than issues caused by payday loans in which we recorded 29,000 cases last year.But given the far smaller scale of the guarantor market, this is a worrying high rate of detriment.