Its new research shows missing an average council tax payment of £167, in the first month of the financial year, can escalate to a debt of over £2,065 in just 9 weeks.

That’s because when someone falls behind on their council tax bill, they become liable for the rest of their annual bill after only 2 weeks. Two types of fees are then added on top of the original tax debt: court costs (typically £84) and bailiff fees (commonly £310). 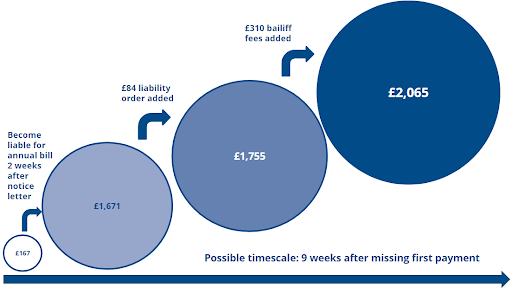 Citizens Advice estimates over £560 million in fees were added to people’s council tax debt in 2016/17 alone. This includes £300 million of bailiff fees which is particularly concerning as some of these fees have to be paid by the person in debt before any council tax arrears can be recovered by the local authority.

While financial pressures on councils mean they are increasingly reliant on council tax to fund local public services, stretched household finances mean more people are struggling to keep on top of their essential bills, including council tax.

MHCLG data shows in 2018, there was over £3 billion of outstanding council tax debt (excluding fees). As shown by the chart below, an estimated 2.2 million households were behind with their council tax in 2017/18 out of 24.2 million that are liable to pay council tax. This is nearly 10% of all households.

Further analysis from the charity shows between 2010 and 2018, the amount of council tax debt grew by 30%. Council tax arrears have risen more than 6% in the last year alone. 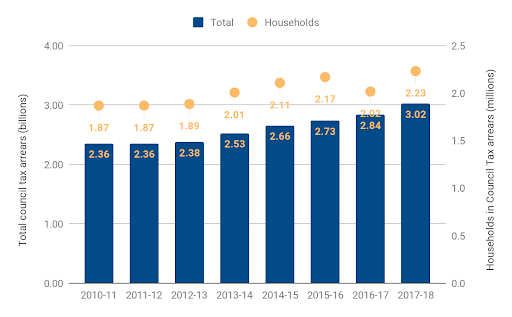 The impact of aggressive debt collection was highlighted by MPs on the Treasury Select Committee last year, labelling government and local authorities “worst in class” for debt collection. They called for the public sector to raise its standards to the level of industry best practice - consumer creditors do not use many of the tactics used by local authorities.

In September, the National Audit Office said there was evidence that aggressive enforcement action is ineffective, and can be harmful in situations when someone is struggling to pay their debt.

The government announced this month that it will review the way local authorities collect council tax. Through this, Citizens Advice wants changes made to the legislation governing this that:

Citizens Advice wants to see these changes made alongside the creation of an independent bailiff regulator. The Ministry of Justice is consulting on this and will report back by the summer recess.

Mark D, 53, who is unemployed and has a mental health condition, said:

“Last year was not a good year in terms of my health or finances. I had so many debts that it became very stressful and hard to find a way to make my money stretch to cover them all.

“In August, a letter arrived from a bailiff. I had become liable for the full year bill and my council tax debt was now with them.

“I emailed the bailiffs about what documents they needed to class me as vulnerable because of my health. These were ignored but the threatening phone calls continued.

“I was told if I did not set up a payment plan on the phone they would send someone around to my house to collect my things. I felt really intimidated, agreeing to pay £10 a month, even though I knew I could not afford it.

“It was a big blow receiving the letters and calls. I was going through a really bad time and seeing the rising debt exacerbated the issues to a point where I felt worse within myself as I had no way of repaying the amount owed.

“In October I applied for a debt relief order but even while that was being processed, the bailiffs continued to demand immediate payments and threatened to send people around.

“When the order went through I was so relieved - those three months were frankly the most stressful and upsetting I’ve ever had.”

“By forcing local authorities to use rigid and outdated collection processes, council tax regulations make it harder for people to pay their original debts instead of helping them to get their finances back on track.

“Through its council tax collection review, the government must fundamentally reform the regulations governing how local authorities collect debts.

“Punitive processes such as charging a full year’s bill after a single monthly payment is missed show how broken the system is - they both tie the hands of councils and force people into debt.”

Last year, its local services around England and Wales helped more than 96,000 people struggling to make their council tax payments.