There is now a huge chasm between the customer service levels of the best and worst energy suppliers in Great Britain. This is according to the latest edition of Citizens Advice’s energy star rating which ranks domestic suppliers based on customer service.

The charity is warning of a ‘race to the bottom’ among the worst-performing suppliers, as the ratings reveal gaps in several areas, including billing accuracy and ease of contacting suppliers.

The star rating table for January to March 2021 reveals suppliers in the bottom five failed to provide an accurate bill for 15% of their customers, compared to less than 3% for those in the top five.

Across the board, inaccurate bills are an issue. They currently make up more than 40% of the problems energy customers came to the Citizens Advice consumer helpline for support with during the last year.

These errors mean people are often charged incorrectly, straining their finances and making it difficult to budget at a time when many already face financial uncertainty due to the pandemic. For people facing debt or unemployment, it can be particularly stressful and add to money worries.

Citizens Advice is warning that suppliers are failing in their most basic obligation to customers as it calls on them to provide accurate bills for customers. The charity is also urging suppliers to protect those at the highest risk of debt by offering tailored and flexible repayment options.

Inaccurate bills not the only problem

The stress created by billing errors is compounded by poor customer service, which leaves people struggling to contact their suppliers to resolve issues.

“Providing an accurate energy bill is the most basic aspect of customer service that a supplier can offer and yet many are failing to do this. All companies have a responsibility to deliver the best possible service to their customers and it’s disappointing to see such a wide chasm between those who are taking this seriously and those who are not.

“When customers with billing errors are unable to contact their supplier for help, it can cause immense stress. These problems are even worse for those who are already worried about money. It’s vital that suppliers fix these issues and provide support for those most at risk of debt.” 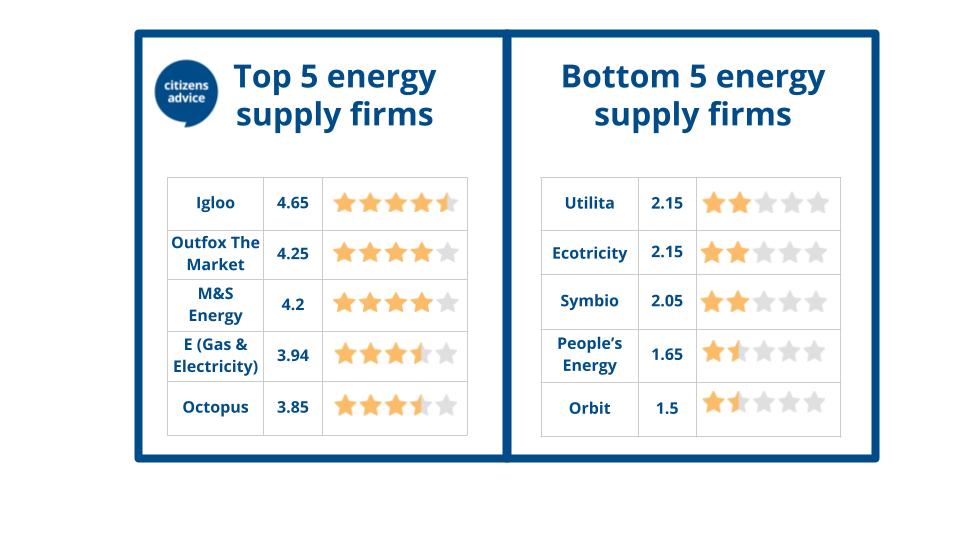 Adrienne’s* story - ‘I’m constantly wasting my time trying to get in touch with them. Their customer service is horrendous!’

NHS practitioner, Adrienne, switched to People’s Energy when looking for a greener and cheaper energy supplier. She was promised her direct debit would be £75 per month for gas and electricity, but her direct debit payments shot up to nearly £150 after the first month.

Adrienne has since found it difficult to contact her supplier to resolve the issue.

She said: “My husband and I both work long hours and neither of us work from home, so we don't use much gas and electricity. And when we are home we would sooner put on a jumper than turn on the heating.

“I’ve given meter readings and as a result we’re in credit, but my supplier refuses to change my monthly direct debit to reflect our usage. I’m constantly wasting my time trying to get in touch with them. Their customer service is horrendous! Sometimes it takes weeks to get through to them. I had to resort to sending a message via Facebook and that took three weeks to get a response.

“When I finally spoke to someone on the phone they would only agree to lower my direct debit by £20 per month. My contract ends in a couple of months and needless to say I will not be renewing.”

Marie’s* story - ‘I’ve contacted my supplier so many times but no one ever calls me back. It’s been more than eight weeks now.’

Pensioner Marie switched to Orbit under the impression that they would offer her £90 per month bills - much cheaper than the £170 per month she and her husband were previously paying. After a few months, her bill doubled.

She said: “I don't understand why my bill has increased as we’ve been using less energy. My son has looked at the bills and they just don’t add up - they have inaccurate meter readings on them.

“I’ve contacted them so many times and they say someone will get back to me, but no one ever calls me back.

“I have given them more than eight weeks to reply to my billing issue, so now I will be contacting the Ombudsman. Once this is sorted, I will be switching suppliers. I’m a pensioner on a low income, so I can’t afford this.”

*names have been changed to protect identities