Last in line: An assessment of consumer protection in the event of retailer insolvency 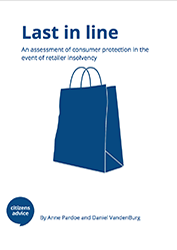 Prepayments form a significant part of the retail economy.  We routinely pay for a wide range of goods, from theatre tickets to furniture, weeks or even months in advance of receiving them.  An estimated 24.5 million prepayments were made by 20 million customers in 2009. There is good reason to believe that this number has increased significantly since then, in part due to the rise of e-commerce.  Three quarters of UK adults bought or sold goods and services on the internet in 2014, up from 53 per cent in 2008 - the vast majority of which will have been paid for in advance.

Prepayments offer clear benefits for traders in the form of guaranteed payment and valuable cash flow, particularly when trading in high value goods. In the vast majority of cases people who have paid for goods or services in advance do not encounter a problem.  But what happens when things go wrong?

In Last in line [ 0.57 mb] we use our unique evidence, gathered from across the Citizens Advice Service, to explore the consumer experience of prepayments and retailer insolvency.

In the first section we explore the political and legal context before setting out the findings of an analysis of 1,380enquiries to the Consumer Helpline in relation to eight high profile retailer insolvencies in section two. We find that although retailer insolvencies are relatively rare, the financial and emotional impact for individual consumers can be severe.  We also identify three problem areas ripe for reform:

In the third and final section we weigh up the arguments and identify four key opportunities for aligning consumer protections more closely with consumer expectations significantly out of kilter with general principles of consumer rights: