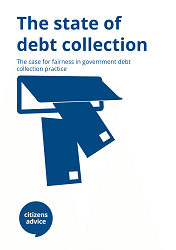 Between 2005/6 and 2014/15 the number of local and national government debt issues that Citizens Advice  helped people with has more than doubled.

The report’s overarching recommendations are: