Renting in the recovery - how many private renters could get caught up in repossessions as interest rates rise? 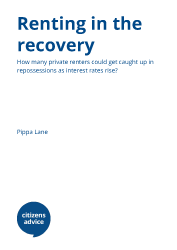 Interest rates have been historically low since 2008 and, while there remains considerable uncertainty over the pace of interest rate rises, analysts still expect rates to return to more normal levels in coming years.

However fast this process of normalisation happens, there will be widespread impacts across the economy. Particular concern has been raised about the likely impact of rising rates on repossessions among the owner-occupier population, many of whom are highly leveraged.

This short briefing note, Renting in the recovery [ 470 kb], considers a related but far less widely-discussed question: how many private renters could be caught up in landlord repossessions, and what rights do these renters have?