Neither one thing nor the other: how reducing bogus self-employment could benefit workers, business and the Exchequer 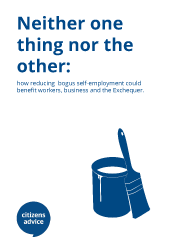 Self-employment is a work status that many people aspire to. It can offer freedom, flexibility and the chance to build a business from the ground up. It boosts the economy by helping people find work, many of whom go on to become employers as their businesses grow.

Self-employment has become an increasingly mainstream form of work - today 4.5 million people work in this way. Our research shows that 75% of Citizens Advice clients who are self-employed are happy with their working status. We will be looking more closely at the life of self-employed people in upcoming reports.

As the labour market and the economy evolve, it is vital that the system for self-employed people adapts and modernises. The government has made positive progress with proposals to scrap Class 2 National Insurance and to move tax returns online. Alongside this, the government should address the lack of clarity around self-employment status as a priority.

Bogus self-employment occurs when workers are told they are self-employed when the legal tests would likely define them as employees. This phenomenon is made more common by the lack of consistency and clarity around the definition of self-employment: employment and tax law take different approaches.

Tackling bogus self-employment will help the government by ensuring it receives the tax and National insurance it is due; it will help responsible businesses who are undercut by rivals; and it will ensure that workers get the basic protections they are legally entitled to, such as the National Minimum Wage and holiday pay.

At Citizens Advice, we help over 80,000 self-employed people per year in our local offices and many more online. We have seen a steady increase in the number of people visiting our advisers to determine whether or not they are self-employed. This appears to be a growing but mostly hidden problem.

We surveyed nearly 500 of our clients to understand how they work and how they perceive their employment status. We then compared this to the law and to existing evidence that our network has gathered about incidences of bogus self-employment.

Our key findings are:

We make recommendations that can help to redress the balance. These include extending to self-employed people some of the rights have been previously reserved for employment, reviewing the tax and national insurance system with a view to ensuring that self-employed people are treated fairly and strongly enforcing the rights of those who suspect that they are in bogus self-employment.