Consumer experience of pension and pensioner scams before April 2015 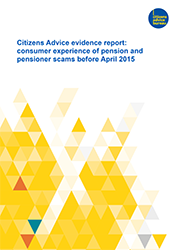 This evidence report explores the different pension scams that consumers have brought to the Citizens Advice service up until the start of April 2015. It synthesises more than 150 case reports and also draws on our wider consumer data. It seeks to identify the key risks that consumers face around scams when making pension choices and throughout their retirement. This in turn can help inform our understanding of the threats to consumers in the new world of pension freedoms and of how they can empower themselves to make the right decisions about their savings. The report has four sections.

We know that people are more likely to be targeted by scammers just before and during their retirement. Our data shows, for example, that people aged 65 or older are more than twice as likely as our average client to come to Citizens Advice with a fraud or scam issue. We have identified four key types of pension scam - gaining personal information, moving savings, offering free “advice” or services and charging for services – plus other scams aimed at pensioners. These others range from £500,000 lottery jackpots and £35,000 investment scams to £15 scams for a punnet of raspberries.

We have observed five main ways that scams are promoted: by phone, text, post, in person or on the internet. Of these, the most common approach is unsolicited phone contact, which represented two thirds of the cases reported to the Citizens Advice Consumer Service over the past six months. In some cases scammers contact people in multiple ways: for example phoning and then sending someone to their house; texting then phoning or calling and then following up with letters.

Scammers often use a carrot and stick approach, offering extremely promising benefits while also using pressurising tactics. We’ve heard from many consumers who have been offered the chance to take advantage of a ‘tax loophole’ or a ‘special investment rate’, while others have been told they’ve won lotteries despite never entering one. Pressure is often applied by saying that special offers are time limited, or by bombarding people with correspondence to catch them at a weak moment. To appear authentic, some scammers claim to be acting on behalf of a client’s pension provider. In other cases they use official sounding names like ‘the Pensions Office’ or say they are a Citizens Advice ‘pensions office’.

The most obvious impact on scam victims is financial, with one consumer featured in this report losing £200,000. For many, the money lost in a scam can mean the difference between a comfortable retirement and a life on the breadline. As well as direct losses, people can also lose through unexpected tax or benefit consequences. Beyond headline financial losses, however, we found a number of other significant detriments. Some people are very distressed by the pressurising tactics or the paperwork they are sent. One consumer spoke for many when they said “I feel really stupid to have given away my pension money to a crook on the phone”. Others recoil from engaging with their savings, exactly not what the new system of pension systems wants to promote.