Funeral payments from the social fund 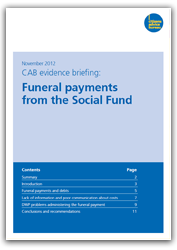 Many people on a low income struggle to pay for the funeral of a close relative or friend without being left with an unmanageable debt. A Social Fund funeral payment is supposed to help people pay for a funeral but Citizens Advice evidence shows that the scheme is not fit for purpose, making a traumatic time in people’s lives even more difficult. There are two reasons for this – the actual cost of a funeral is well above the financial help provided by the scheme and the processes involved in claiming a grant are confusing and take too long.

CAB evidence shows that these are persistent problems which have existed for many years. However, problems are mounting because funeral payments are failing to keep pace with the increasing cost of even a simple funeral and there is a lack of clarity about what a funeral payment will cover.

The client of a Welsh CAB faced a debt of £1,930 following the death of her brother, who was single and homeless. She took responsibility for arranging his funeral and applied for a funeral payment, but only received £447 because her brother had £836 in his bank account. She was on pension credit and disability living allowance, and had no other relatives who could help.

A 90 year old grandmother was distressed to be faced with a debt of £1,100 because she was not told that her deceased grandson’s assets would be deducted from the funeral payment. She was told that she would receive £720 for funeral costs, and £700 for associated costs, but this was reduced to £320. She was on pension credit and other benefits, and could not afford to repay the debt. She was particularly upset because she had never been in any kind of debt before.

Citizens Advice Bureaux in England and Wales have dealt with around 3,000 enquiries about funeral payments in the past five years, and bureaux feel so strongly about the issue that several have published their own local evidence reports.3 Evidence from bureaux across the country finds that the key problems with funeral payments include:

Arranging and paying for a funeral is not an experience where consumer and market norms, such as shopping around for the best price, can be expected to operate. Delay is also not an option.