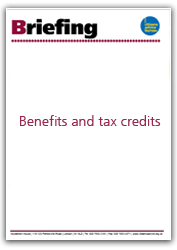 Tax credits form a vital component of the Government’s strategy for tackling child poverty and making work pay. Almost six million households rely on tax credits to supplement their income and fund their childcare costs1. For those on the lowest incomes a tax credit award, including childcare, can be a substantial part of their weekly income. A lone parent with two children working 20 hours a week at £6 an hour and with £75 weekly childcare costs would, for example, be entitled to around ’200 in working and child tax credits. Families on higher incomes receive £10.

Since tax credits were introduced in 2003 Citizens Advice Bureaux have helped hundreds of thousands of people with tax credit enquiries. Our 2005 report Money with your name on it? highlighted problems with poor administration, complex systems yet poor explanatory information, long delays in resolving problems and high levels of overpayment and recovery. These were causing significant hardship to families dependent on tax credit income. In response the then Prime Minister, Rt Hon Tony Blair MP, apologised for the hardship caused to some families. The Government announced a series of administrative changes. These were followed by more substantial changes to entitlement rules and overpayment recovery in the 2005 pre-budget report.

Two years on some improvements have been introduced. But tax credits continue to be a major area of work for the Citizens Advice service. In 2006/07 Citizens Advice Bureaux in England and Wales helped people with over 186,000 tax credit problems – a rise of 21 per cent from the previous year.

CAB evidence suggests that the complexity of the tax credits system creates many problems for claimants who find it difficult to understand their entitlement. Overpayments and harsh and complex recovery regimes still cause too much confusion and hardship. In order to understand more about the problems, we asked visitors to our public website in April and May 2007 to tell us about their experiences of claiming tax credits. One and a half thousand people responded. Respondents were roughly representative of the tax credit population as a whole, but a disproportionate number in the survey considered tax credits to be a very important part of their income.