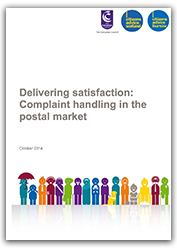 Postal services across the UK continue to play a key role in facilitating communications despite the challenges from digital technology and the consequential reduction in letter volumes. The postal service is pivotal in the delivery of physical items, especially those purchased online, which has resulted in a significant increase in parcel volumes. Royal Mail, as the designated provider of the universal service (providing the service six days a week, at geographically uniform affordable prices), is the largest operator within the wider postal market. It handled approximately one billion parcels and 13 billion addressed letters1 in 2013/14. However, alternative end-to-end postal operators are handling increasing volumes of addressed letter mail.

In this rapidly changing postal market it is more important than ever that postal operators have effective complaint-handling processes. Dealing with complaints effectively benefits both consumers and operators. It helps build better levels of customer trust and loyalty and limits negative publicity. This will be increasingly important in the more competitive sectors of the postal market where consumers can exercise choice of supplier. Complaints also provide a wealth of data on systemic problems and consumer views.

Fundamental changes were made to the complaint-handling framework through the introduction of the Consumers, Estate Agents and Redress (CEAR) Act 2007. This placed greater emphasis on the importance of complaint handling and required licensed postal operators2 to take greater responsibility for resolving customer complaints internally. The formal complaint handling standards introduced by Postcomm in 2008 set out the minimum standards for licensed postal operators.3 The Postal Redress Service (POSTRS) was also approved as the external redress scheme allowing consumers to pursue unresolved complaints.

Responsibility for the regulation of postal services transferred from Postcomm to Ofcom in October 2011. Ofcom re-approved POSTRS as the consumer redress scheme and established consumer protection conditions for complaint handling that largely reflected the previous standards.

Since the introduction of the consumer complaints standards in 2008 there has been no detailed formal review of complaint handling by the regulator. With changes in the structure of the postal market, evolving consumer needs and the developing Alternative Dispute Resolution (ADR) landscape, it is an opportune time for Ofcom to carry out a review to consider whether the current system is proportionate and works effectively in the consumer interest and are pleased that Ofcom is about to start its review with the aim of publishing a decision in 2015. We consider it important that a review is conducted and identify issues for further exploration and development in any regulatory review of the complaint-handling framework.