Beginning to see the light: Why we need greater transparency in the RIIO model of energy network regulation, and how to deliver it 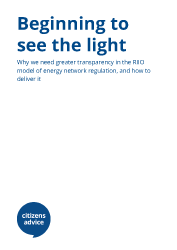 All three parts of Ofgem’s RIIO price control for energy networks are now in place. Between them, RIIO-ED1, RIIO-GD1 and RIIO-T1 will allow gas and electricity network operators to collect over £70bn from consumers’ energy bills over the next eight years. This represents the culmination of years of hard work by the regulator, the companies and a huge range of stakeholders.

Now, to ensure that consumers receive value for their money and a 21st-century level of service, the greatest need is for active scrutiny of how the RIIO system is playing out in practice.

At the heart of this is adequate reporting on network performance. Consumers must be able to check up on how their network is doing and how their money is being spent. So must industry bodies, civil society groups, think tanks, journalists, politicians and consumer representatives, Citizens Advice among them.

As things stand, networks are lacking in transparency. Earlier this year, the Energy and Climate Change Committee considered concerns that a ‘lack of information makes it more complex to assess whether or not the price controls are providing value for money’, and recommended that ‘a standard form of reporting would bring clarity to the performance of the network companies and the impact of the RIIO price framework.’

Ofgem provides some information on networks’ performance under RIIO and most (not all) of the companies produce public-facing reports of some kind. Some are helpful, but mostly these have unfortunately tended to be obscure, irregular, tendentious, non-comparable and hard to find.

To redress this lack of transparency, in Beginning to see the light [ 0.76 mb] we are calling for a refreshed focus on openness and good reporting under RIIO, based on five principles: reporting by both Ofgem and the network companies should be findable, simple, comparable, non-whitewash and timely.